November 06, 2015
If you're a stay at home parent today, odds are you've seen the Pinterest boards full of crafts for toddlers and preschools, the blog posts about making your own paints, the ideas for sensory play and wholesome fun. And if you're like me, you aspire to try some of those things but often real life intervenes and it just doesn't happen.

But every now and then I get it together and decide to give something "Pinterest-y" a try. This week I tried two related ideas in one day, even!

Last week at school E's class made Halloween art using shaving cream to paint "monsters". All I know about this is what he described, so I wasn't quite sure what they had done, but then Monday he brought his home. Except when we got home, what I found was a giant mess inside his school "mailbag"--a piece of black paper and a lot of white crumbs and glitter. Plus one googly eye.

He was pretty sad that it had fallen apart on the way home, so when he ended up home sick on Tuesday I decided to see if I could figure out how to recreate this painting. I couldn't find anything that matched exactly what they had done at school, but we decided to improvise and it worked pretty well: 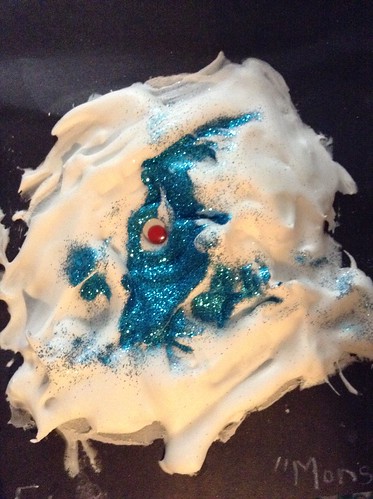 I think the school version had a thinner layer of the foam, based on the crumbs that peeled off, but he was pleased enough with our recreation.

I didn't measure anything, so I can't give you a recipe, but we squirted some shaving cream in a container and poured in some white glue. Some recipes I saw called for equal quantities of the two, ours had more shaving cream and less glue. At school apparently they kind of dipped the paper in a bowl of it, but at home he painted it on. Then we sprinkled on some glitter and attached the googly eye. Voila! One monster.

While searching for that, I found a lot of other shaving cream paint ideas. We've previously used shaving cream with food colouring as bath paint, so I decided to try a new version of that. The recipe for "bathtub chalk paint" called for smashing up some sidewalk chalk and stirring it into shaving cream. Fun, right?

Well, the process of creating the paint was fun--who doesn't like to bash things with a mallet? When we stirred the chalk dust into the shaving cream, though, it didn't mix well, and at first we had white shaving cream spotted with coloured specks. We did find that letting it sit for a while produced a more uniform colour. It was fine to paint with, although E didn't find it terribly exciting. The problem, though, came in the clean up. The shaving cream rinsed away easily, but the chalk dust just linger in the tub, requiring a full scrubbing. And I put the containers we had mixed it in in the dishwasher--big mistake! Chalk dust on everything in that load, and anything plastic had a very stubborn film of dust that is still lingering on some things after being handwashed.

If you want to save your cleaning time for the absolutely necessary tasks, skip the chalk paint.
parenting

Fuzzybunny1978 said…
I always wondered about chalk paint. It was one I never tried. Sorry that it had to be you to find out for the rest of us that it isn't worth making due to the clean up issues.
I thank you!
I should see if William has gotten over his issues with the smell of shaving cream and see if he wants to make bath paints again....
3:13 pm

Mandyz said…
Sounds like fun. I save those messy crafts for playgroup. Our fun-coordinator arranged all sorts of messy activities like this, but she's moving :( Hopefully the new coordinator is at least as fun for the kids. We did the shaving-cream-glue before and I didn't like the results as much. I did however like the shaving cream with paint squeezed on top and lightly mixed on the top with a stick, then place paper over top so that paint transfers, then scrape off shaving cream. That made an interesting effect and I actually put those ones on the wall.
2:36 pm