Third Time is (Hopefully) the Charm

August 05, 2015
M had his third set of casts put on yesterday. The second set was apparently VERY painful for him, and we had a very miserable 36 hours or so while he adjusted. We also ended up taking them off two days early because his circulation was impacted--the doctor thinks the heat and humidity last week caused things to swell, because she saw other babies who had the same issue. He legs were extremely tender when the casts came off--all in all, last week was rough. Probably to be expected, as it was the first significant correction to the whole foot--the first casts were apparently focused mainly on the alignment of his toes, as I understand it.

So far this week is looking better. He screamed while they put the casts on, of course, but stopped when I picked him up and was smiling a few minutes later. He took a good nap yesterday afternoon, too (although a better night's sleep would have been nice...), so I think he's in less pain this week.

The real question is how much improvement we will see in his feet. Our doctor is concerned that due to the severity of his in-turning and the late start we got with casting (because of the hips), that casts alone may not be enough to correct things (surgery would likely be the next step then). Her plan right now is to do casts this week and next week, take some time off for stretching, and then meet in September to see how they look. So we're hoping this week's casts bring some good lasting change.

I don't have a good feet only shot from before the first casts, but here is the progress since then: 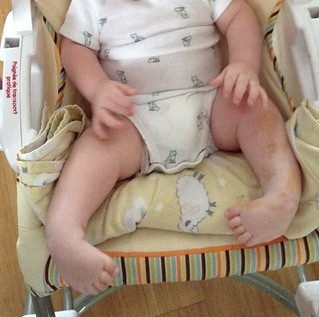 After the first cast 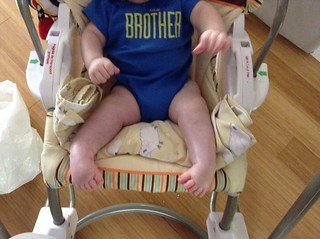 And after the second

And for friends and family, here is a happy baby playing after yesterday's casts went on!
clubfoot