November 06, 2015
I can't believe it's been another month since I posted. Well I can, because life has been busy. Occasionally I take pictures of things and tag them "blog" so that I can one day come back and blog about them, but it just isn't happening.

For this post I'll do a quick medical update on M, and then I will try to find time to come back and blog about at least one non-medical thing from my photos!

The short version is: still not much news. We've done several more rounds of casting, and a few weeks ago we were told he was nearly ready for the tenotomy. Unfortunately, when we went back for the procedure his feet had tightened up again and were not rotated to the proper angle for the tendon release. (Well, medical opinions about this vary, but at any rate the doctor who does the procedure wasn't comfortable doing it, and that's what counts!)

We've had a few more casts, and now we are no longer taking them off 12-24 hours before the new one goes on, because even with diligent stretching we were noticing things tightening up in that time frame. The good news is that this has resulted in a really significant change to the angle of his feet, especially the left one. The bad news is it means his legs are more sensitive, swollen, etc. because they aren't getting a break. But if it means we can get casting done with and move on faster, it will be worth it.

Fingers crossed that next week we get the tendons released, and then have just a few more weeks of casting. We will see! In the meantime, if I get frustrated at how long this has taken, I have made myself a collage so I can see just how far his feet have come in the last 3 months: 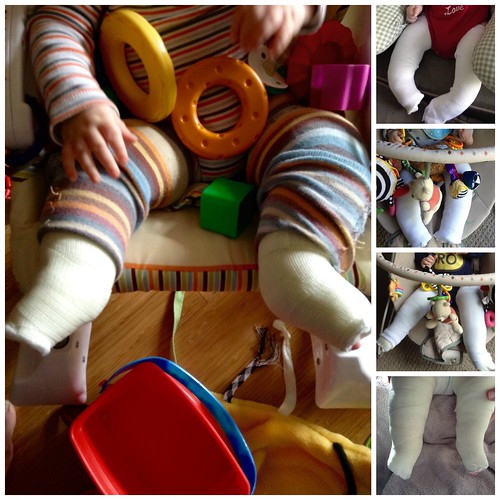 And in the tips and tricks file, I've been shopping for clothes he can wear this winter. He's likely going to be in a brace 23 hours a day, but will still need to tag along on walks to and from big brother's school in the cold. For anyone following along with a similar dilemma, Carters and Old Navy both make some "jumpsuits" with snap closures around the legs--they could be pulled on over the head, and opened and closed as needed for diaper changes, without needing to remove the foot braces. Carters has several in warm fleece (in the US, their Canadian offerings were slimmer), and ON has more in cotton, so we have a few options and can layer them if we need to.
clubfoot

Fuzzybunny1978 said…
William thinks that Matthew must be super baby to put up with all those casts. He sends hugs to Evan and a kiss to Matthew.