December 30, 2015
Finally it was day three, time for the fun part! The houses were all assembled, and our guests would soon be arriving, so we needed to get the last stuff ready.

Work Area
We pushed some furniture back and brought up a folding table from the basement that had room for all 6 kids to work at once. I strongly caution you to think through your available space before inviting people to something like this. E is still sad that we didn't invite a few more people, and had a hard time choosing just 5, but it would have been too much chaos and not enough room. Next time I'm going to move the play kitchen completely away from the work space, because there wasn't enough room for parents to easily circle the table and help the kids out.

Then we put down a plastic table cloth and put a gingerbread house at each spot: 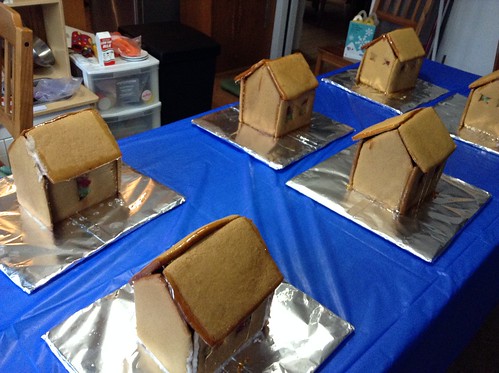 Frosting
Once again, you have the option of making royal icing, which dries hard and can be piped into pretty designs. For a grown up gingerbread house, I think this would be my choice. But I knew that four and five year olds weren't going to be doing a lot of fancy decorative piping, and I also knew that they might end up eating some of their frosting. So something without raw egg (or again, meringue powder) that actually tasted good seemed wise.

I went with a pretty basic buttercream type frosting. I didn't measure or keep great track of anything, but I think I used two sticks of butter (so 1 cup). Whipped in the stand mixer, then slowly added icing sugar (powdered sugar to those back home in the US). I know I used less than a bag (which I believe is 1 kg), but I don't know how much less. In between additions of sugar I drizzled in some vanilla (about 1 tsp) and some whipping cream (maybe 2 Tbsp by the end? I wasn't measuring at all.). Once the sugar was incorporated I turned the mixer up to high again and really whipped the icing until it was nice and fluffy.

I then divided it into 6 small bowls/ramekins, and stuck a small butter/spreading knife in each one. I tried to set up a station for each kid so they wouldn't have to do a lot of sharing of supplies, to make things go better.

Candy
I think all the kids were agreed that the most fun part was the candy. The day before the party I took E to Bulk Barn (a chain bulk food store up here) to pick out candies to use for decorating. Gumdrops and candy canes were required, of course, but we found a lot of other fun holiday choices. There were sprinkles in the shape of Christmas lights, candy canes, and gingerbread men. And gummy wreaths and snowflakes, red and green smarties, etc.

And at Bulk Barn and our local grocery store we found these decorator candies: 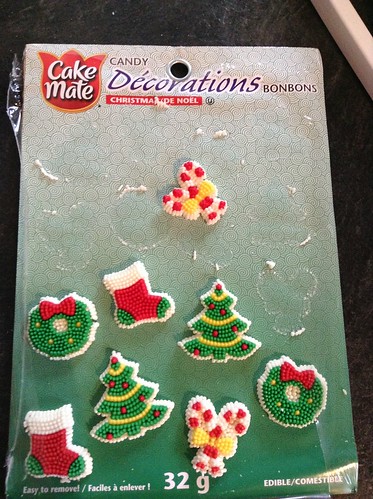 In addition to these by CakeMate (from the grocery store baking aisle), the bulk store had some snowflake shaped ones by Wilton. We also have a baking supply store locally that I suspect would have some of these sorts of things.

I decided the best way to handle the candy would be to give each kid a plate, with a rule that they could only handle directly (whether for decorating or eating) candy once it was on their plate. So for the fancy decorations that were limited in quantity, I put one of each on each child's plate to start so that everyone would get one. Then I put the other candies in cupcake tins with spoons to serve them onto their plates: 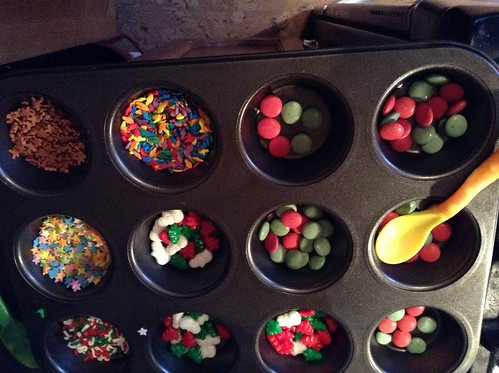 The moms helped out a lot with the serving, but the kids were able to scoop some out themselves without handling the candy directly this way. As I mentioned before, I also had some house shaped cookies for the toddlers present--the moms were also able to pick out a few candies to put on their plates so they could decorate their cookies just like the big kids.

All in all, I think it worked really well! A sampling of some of the creations: 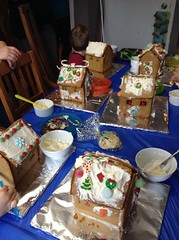 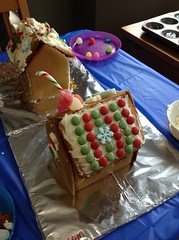 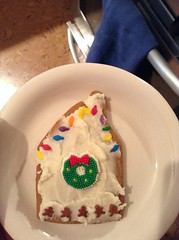 OK, full disclosure, that house cookie is one I did, not one of the toddlers. :-)
cooking gingerbread parenting