March 14, 2016
We had a short visit to the orthopedic clinic today to meet with our primary doctor (the one who has been providing most of M's care, including his feet, but not the one who performed the procedure last week).

I'm sure I could have come up with a catchy post title that references "bracing", since that's what we came away from today's appointment with... 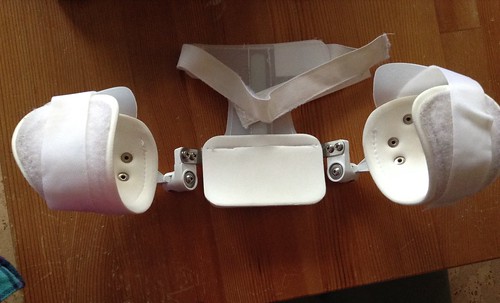 This is the hip abduction brace that the surgeon recommended last week just to maintain good joint development. So much smaller than a spica cast! And removable! Baths, swimming, normal clothes, all of that can happen with the brace.

The current plan is that M should wear it about 12 hours per day right now, so probably in his sleep if we can find a way for him to be comfortable sleeping in it. Our doctor said she has some patients who end up preferring to wear it during awake times, but our concern there is the limit to his mobility--that might make sense for a tiny baby who doesn't need to learn to crawl and stand, but it would pose a problem for an active 10 month old.

The clinic had this one on hand, so they sent us home with it today. It requires a bit of cleaning before we can put it to use, so it will be a day or two before we get a sense of how M tolerates wearing it.

The surgeon we saw last week was unsure it would work with the foot casts we are probably headed back to, but our doctor said she's done it before and has no problem with it, so she'd rather we get started now rather than waiting. Typically the brace is used for about 6 months, so we might as well get going on it!

And we have a plan for the feet again. She was disappointed that the other surgeon didn't feel comfortable performing the tenotomy last week--she feels it's still the best option, and that there is no reason to jump to a larger procedure at this point. It's unfortunate that someone made a mistake in scheduling and she wasn't available to come into the OR to perform the procedure herself as originally planned, because it would be nice to have it done now!

However, she said it will be a quick procedure and she is going to ensure that M gets put on her OR schedule soon rather than having to wait another 6 weeks for a timeslot. Since he has already had a pre-op appointment he can be put on the schedule quickly without any wait for that. The hope is that we will be given our date early next week, with the surgery likely happening within a week or two. If it goes well and happens early enough in the day it would typically be a day procedure and we would be home quickly, just like last week, but occasionally they do keep babies in overnight.

She is also thinking she might just put short leg casts on after the procedure, which would allow for more motor skills work (standing probably couldn't happen, but crawling could) and fit better with the hip brace.

So all in all, it was a good appointment, and it's always nice to have a plan. Now what we need is for things to actually go according to plan for once!
clubfoot hip dysplasia