April 03, 2016
So now that we've had the hip abduction brace for a few weeks, I figured I would report back on how M is adjusting to it. We decided to ease him into sleeping in it, with a goal of building up to at least 12 hours in it by the end of the first week.

So we started with a bit of daytime wear, so he could get used to it while he was awake and otherwise happy. I managed to snap a few photos then so you can all see how it works.

This is the view from the back, where all the hardware is. With the brace on he can roll and crawl (well, he still only goes backwards, but in theory he could go forward!). If he's on his back it holds his legs up and out, so below the knee his leg is essentially dangling in the air. 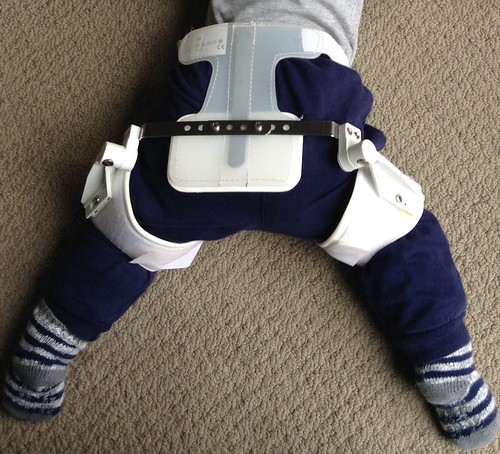 The result is that it's not very comfortable for him to be on his back for long stretches. He prefers to sleep on his side anyway, but as you can see here, the brace doesn't exactly make that easy or comfortable either--this is the hardware that's on the outside of each leg: 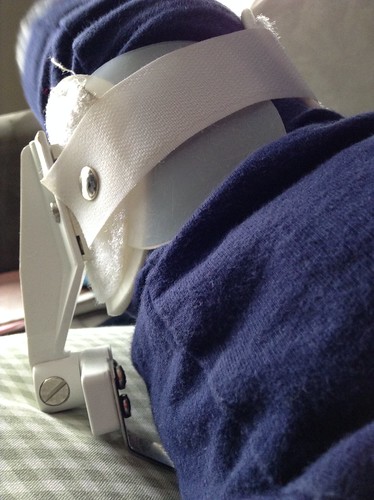 So to make the transition to sleep, we started by putting him on his back with a rolled up towel under his legs. The first night he fell asleep much faster than I thought he would, without too much fuss. He woke up after a few hours, and although I was able to resettle him, he started waking up more and more frequently. When it hit twice in an hour I took the brace off for the rest of the night, and we tried again the next night. Within about 3 nights he was keeping it on the whole night--still waking once or twice, but not too bad.

But then in a few nights he got comfortable enough in the brace to try moving around in it, and he kept rolling and ending up with his legs off the towel, in uncomfortable positions. Initially we tried to contain him by putting rolled up hand towels under the crib sheet, to keep him corralled on his back with his legs on the beach towel: 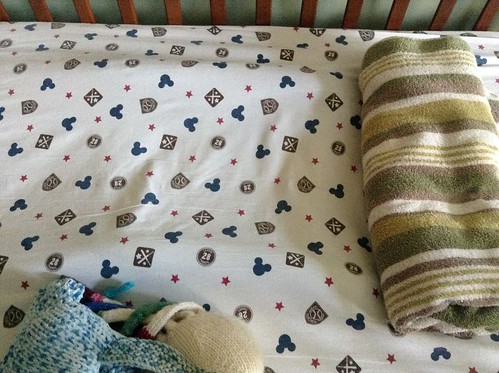 This didn't work for long, though, as he just rolled out of it and was even more uncomfortable and frustrated. Our current strategy is to still place him in the crib on his back, but after he falls asleep I check back in. If he has rolled onto his side and has one leg hanging out in the air, I scoot the towel under it for support until he wakes up and repositions himself again. Last night he fell asleep on his stomach, which I think would be the most comfortable position but he has largely resisted it--we shall see if this is the beginning of a new trend.

Overall sleep has settled down to just slightly worse than it was before he got the brace. The biggest change has been that he is waking up around 5:00 or 5:30 most mornings and having difficulty going back to sleep. We've tried removing the brace at that point, but that seems to just get him excited and make him think it's time to get up, so for now we just cross our fingers and hope for the rare luxurious day when we can sleep past 6:00!

The repeat tenotomy for his feet is scheduled for this Tuesday, so we will find out after that if he is able to wear the brace while he is in casts or not. I'm not sure it will work, but we will know soon!
hip dysplasia