April 20, 2016
I now have the Music Together song "No More Pie" stuck in my head and probably will all day...or at least until we go to music class and something else equally annoying gets lodged in there.

We aren't quite out of pie here, although we are putting a good dent in the latest. So far we've only made one in April, but there were several in March that I never shared!

First, we celebrated Pi Day with Shepherd's Pie for dinner and key lime for dessert 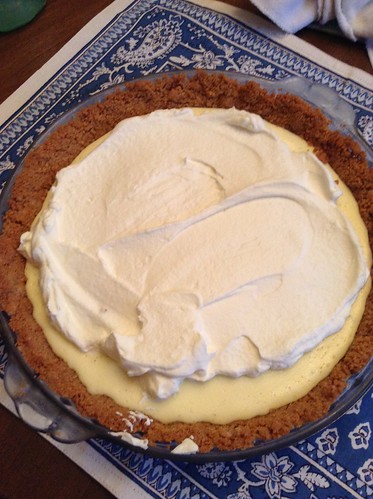 I think we followed the recipe pretty exactly, and it was delicious, but very hard to slice: 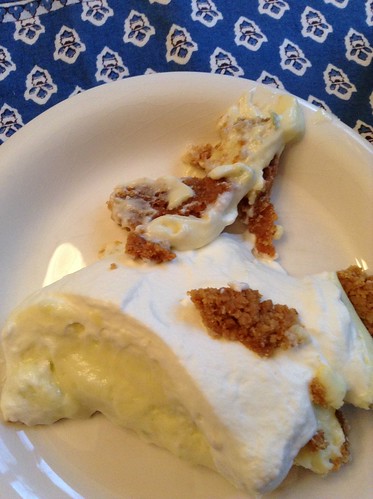 Then for my birthday I received a copy of The Four and Twenty Blackbirds Pie Book, so it was clear that Easter required MORE PIE.

I made the Maple Buttermilk (no photo, sorry) and Lemon Sour Cream from the book. The maple buttermilk was good, but we did discover it was much better leftover--although the book says you can serve it warm or room temp, cold is the way to go. I also found their crust, while delicious, was really hard to cut. And for this pie, you partially prebake it and then bake more with the filling in--the cook time listed for the partial prebake was not long enough, so the crust wasn't fully cooked in spots.

Lemon Sour Cream we did a full sized version in the regular crust as written (also hard to slice), but we made a small one for E in his "toy" IKEA tart pan with a graham cracker crust. Having tasted both, I can tell you that graham cracker was a MUCH better option for this pie--which was delicious. 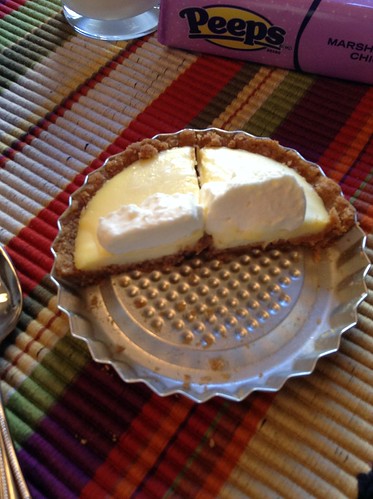 Then we took a few weeks off from pie. I had been thinking of something with rhubarb for April, but hadn't seen any yet after the cold weather we had at the beginning of the month. But while digging in the freezer for a quick dinner the other night, I discovered two bags of frozen chopped rhubarb from last year! Clearly needed to be used up before the new crop arrives.

So we went for Rhubarb Custard pie 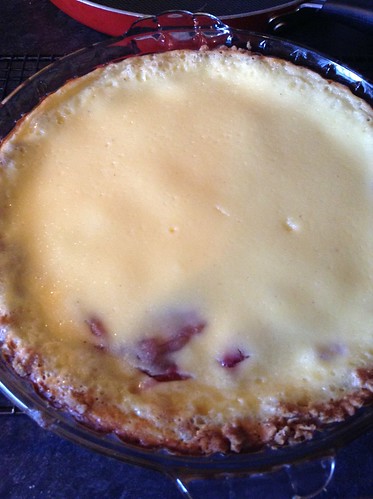 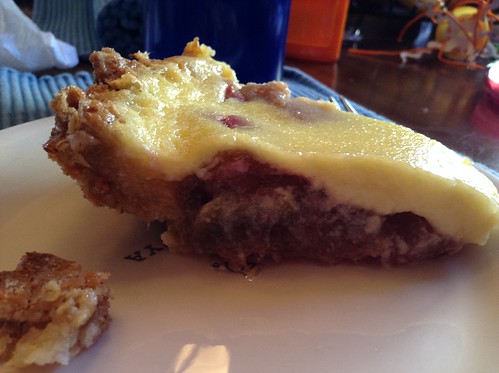 A few quick thoughts about this recipe:
-the oat crumble crust is delicious, but really hard to work with. I see the blogger who wrote up the recipe at that link had problems with it sticking--I didn't have that, but I had a really hard time getting it to come up the edges of my pie plate. Next time I think I would just make more of it, because it's yummy, so why not!
-The amount of cornstarch in the rhubarb compote layer was a bit much, but that may have been due to using frozen rhubarb. I might just have to try again with fresh to compare.
-The cooking times in this book seem way off to me, based on the earlier recipes and this one. I ended up turning the oven to 375 instead of 325 and still had to cook it about 15 minutes longer than the recipe said--and as you can see, my custard was just barely set! (we had to leave for swim lessons or I might have given it 5 more minutes.)
My oven is usually pretty accurate, although I should probably check it again in case this is a sign of a problem. No other baked goods have given me trouble lately, though.

E proclaimed this the best pie ever, although then after thinking about all the pies he's tried this year he demoted it to second, after the strawberry lemon pie. He's really enjoyed all the citrus pies, and this was similar in a lot of ways--tart fruit flavour, creamy custard, crumb crust.
eating seasonally year of pie