April 13, 2016
I've shared the basics of our most recent update with friends and family on Facebook already, but for anyone following along via the blog, the quick summary is: everything went really well last week! M's surgeon was able to open things up and release both Achilles' tendons, and also found a bit of scar tissue (or something, she couldn't be sure) in there to clean up. She was able to get the feet to a nicely corrected position in the casts. He was very sleepy and a bit fussier than normal for the next day or two, but otherwise handled things like a champ. They admitted him but since he was doing well they allowed us to head home the same night, which was a huge relief.

He managed to catch a cold at home a few days later, and is also cutting multiple new teeth (at least 2, possibly more--it's always hard to know!), so he still isn't quite his usual happy self (and I am not very well rested). But all in all it hasn't been too bad.

These are the casts he came home in after surgery (with legwarmers on top--the casts themselves were the same semi-rigid fiberglass they've been all along): 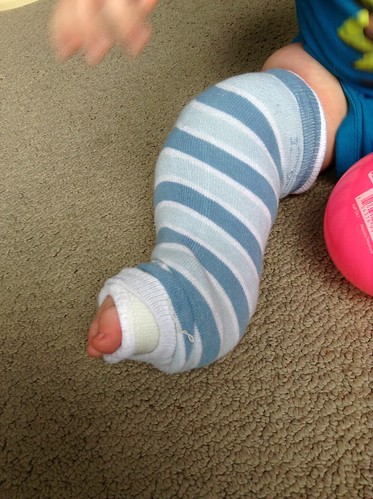 They were incredibly thick and heavy this time around, and after three months of freedom I think that was especially challenging for him. They were also put on with bent knees instead of the much straighter angle he has had in the past--I think this was to allow him to continue wearing his hip brace even with the casts on. (We did take a short post-op break from it in the interest of sleep, but are back to it now.)

The bent knee poses some challenges--he is not as comfortable on his belly as he used to be in the straighter casts, for one thing. When he sits he's a bit more off balance, but that's probably helping him develop some great core strength. And getting pants on over the casts is a bit trickier. But all the time in straight casts had resulted in a baby who didn't readily bend his knees, so I'm hopeful that a few weeks like this will help him out.

He had his post-op check up this week and when they removed the casts his feet were proclaimed to be "beautiful". They really seem to be holding the correction much better than they have in the past, so we are feeling more hopeful that it will last this time. (A small percentage of kids have relapses months or years down the road and require additional surgery and casting. It's usually when there has been a problem with the follow up bracing, but it can happen spontaneously. M's case has been difficult enough that there is a greater chance of him being in that small percentage.) There is a noticeable improvement to his circulation this time, which has always been a problem.

He is in casts like the ones pictured again for this week, and next week he may move to shorter (below the knee) casts, which will allow him more freedom of movement. The plan is to move from the shorter casts (probably 1-2 weeks of them) into Ankle Foot Orthotics, rather than the more typical boots-and-bar. The AFOs should make it easier for him to get up and walking quickly, which at this point is a high priority. I can't find much information about the use of AFOs in clubfoot babies, so I'm not quite sure what to expect! But I do like the idea of getting him moving soon. He really wants to get up and go.

Returning to casts after a long time out has had some challenges. M is old enough to know what life without casts is like, and to be mad that he's lost that. He remembers real baths and is very jealous of big brother still getting to splash in the tub. He is frustrated by not being able to do things he could easily do a few weeks ago. But he is also resilient and determined--yesterday he figured out how to drag himself forward on his arms to reach things, since the angle of his feet in these casts makes regular crawling too hard.

Because winter hasn't quite let go of us here in Southern Ontario, we still have to keep his legs and toes covered up when we go outside. We are lucky enough to have a lot of hand me downs, so I went digging and found some loose leg pants one size up from his usual that seem to work. The cuffs on them are snug, but since they are too long I just leave the cuff at the toe of the cast instead of trying to pull it all the way up. Then we cover his toes with some ankle height athletic socks (the type I hate wearing because they slip down over my heel--but somehow I still own multiple pairs of!): 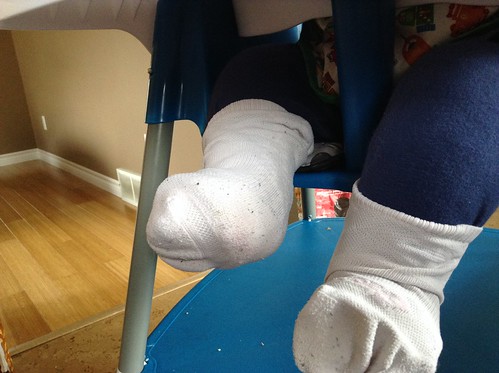 All in all, he's holding up pretty well--but we certainly will be grateful to be done with casts!
clubfoot