April 20, 2016
Everything continues to look great with M's feet. His doctor put him in short leg casts this week, so he can bend his knees and move around more. She's even given the all clear for him to bear weight on the casted feet, so we are slowly working on getting enough strength to stand. I suspect it will take a while yet, because some of those muscles are probably similar in development to a typical 3-4 month old, rather than a one year old. He really wants to get up and around, though, so hopefully he will progress quickly.

The next step is Ankle Foot Orthotics, which require a mold to be made of his feet so they can fit him perfectly. From past conversations (when we expected him to go into a boots and bar combo instead of AFOs), I was under the impression that we could get a same day appointment with an orthotist. Apparently for AFO molds it's a different procedure (the orthotist comes to meet us in our usual clinic), so although we were told he could be ready for them as soon as next week it will be a bit more of a delay. He's booked to have molds made on May 2, and then after the take the molds he will go back into casts until the AFOs are ready. Not sure yet how long that will be, but hopefully it's quick.

The short leg casts mostly make life easier, but they do require a bit of monitoring. Apparently they are prone to slipping down the leg, which is why they aren't typically used when trying to achieve correction. I started off just trying to keep an eye on them, but I quickly realized I couldn't remember if there had been a gap between the cast and the knee initially or if it had slipped a tiny bit. So now he has lines drawn in Sharpie on his legs marking where the tops of the casts were, so we can check them every day!

Since the casts are so much shorter, the Baby Legs we were using as cast covers are a bit big now. Fortunately for us we discovered that they are almost exactly the same size as 4T socks, which we have a lot of! I probably threw out a few pairs with stretched out elastic this winter, unfortunately, because those would be perfect, but we should have enough to get by. 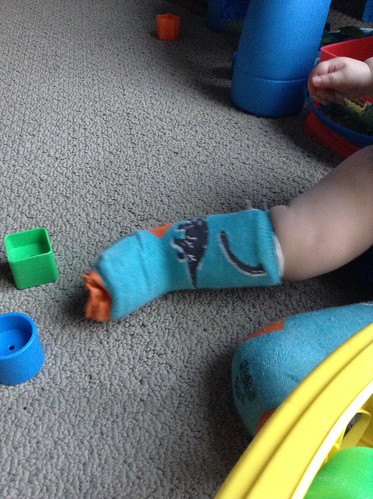 It was hard to get him to sit still for a leg photo! That's him turning to try to scoot away. The position of the feet in the casts still makes getting on all fours to crawl awkward--and the AFOs will be similar, so that just may not be a milestone we reach in a typical fashion. But he can pull himself along using his arms, and while sitting can pivot and scoot a bit, so he's beginning to figure out how to get what he wants!
clubfoot