May 25, 2016
I have a lot to say about life with AFOs so far, and this post got wordy fast--sorry about that. I'm going to aim for a third post in this "series" with the few tips and tricks we've learned so far--this one is just more about the process of fitting and getting used to the orthotics.

The AFOs are custom made--in our case, the orthotist came to the fracture clinic (where we go for casting, even though it's not an actual fracture--just where the supplies and experts are!). We had removed his short casts the night before, and she then took a mold of his foot using casting material, cut it off, and the doctor put a new cast back on to hold his foot while she made the AFOs.

They had some swatches of material so I could choose a colour or pattern for them. The expectation is that this pair will last about a year, so I decided to go with solid blue for now. Next year he will be old enough to pick his own, and maybe they will have more choices of prints then--most of what they had didn't look very cute on the swatches.

About 10 days later we went to the orthotics clinic for a fitting. When they make the AFOs, they make them a bit larger than the mold taken of the foot, and then they can cut them down and add padding and things as needed to customize the fit. I think this also allows them to stretch the life of them a bit longer, which is nice because they aren't cheap. (In Ontario the government pays for 75% of the cost under the Assistive Device Protocol. I have more to say about health care funding, but that's another topic--for today I will stick with the fact that we are pretty grateful we live where we do, even if there could be improvements.)

This was what the AFOs looked like when we came home after the initial fitting: 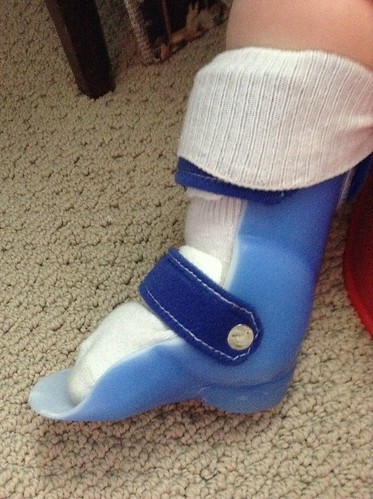 As you can see, they were still quite long for his foot. We had some other issues with fit as well, namely that his foot kept slipping up and back, resulting in his foot being in almost a pointed toe position. We went back a week later after seeing the doctor, carrying a list of suggestions for how to make them fit better, and some changes were made that improved things--the photo I posted yesterday is an after shot that shows the changes made to how the straps are mounted, which gets us a slightly snugger fit. She also added some non-slip padding under his foot: 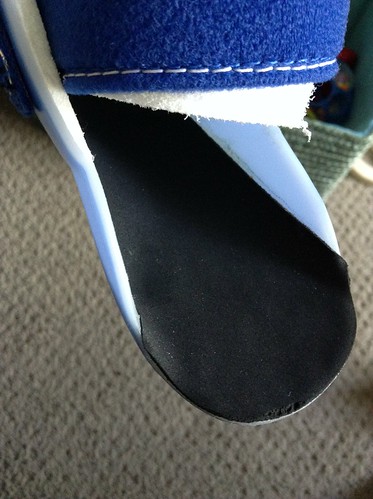 The plan had been to cut down the length, but the padding took up some of that extra space. We may still get the left one cut down, because it is longer for some reason. We may also end up adding another strap across his toes to really hold his foot down, but the drawback of that is it becomes hard to get his foot into a shoe.

When he's wearing the AFOs while awake, the recommendation is to wear a shoe over them--it helps hold them in place, and also gives him a more stable surface for weight bearing as he learns to stand and walk. Fortunately I had just sorted through a box of hand me down shoes, so we had a big selection to try on for fit. What ended up working were some Stride Rite sneakers that were 2-3 sizes larger than he would wear for his own foot, with a tongue that can be fully pulled up to squeeze his foot in (many children's shoes have elastics over the ball of the foot, which don't stretch enough to accommodate the AFOs). When we returned to the orthotist she extended the velcro strap so it would reach easily across the extra bulk (thanks to Alison for that suggestion!). This is a before photo, where the strap didn't quite reach: 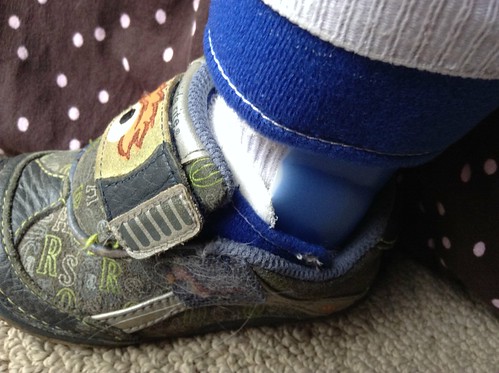 We are still figuring out how best to put them on so they stay put, and sometimes they just don't stay in place well. With the heat wave that just started here we are also learning that the maneuvers that worked a few days ago in cool weather suddenly don't work on a hot, sweaty, swollen little foot.

But there has been a big payoff for all the trouble--weight bearing has become much easier for M, and he is getting stronger fast. He can support himself standing at a table or activity cube for a pretty long time now! 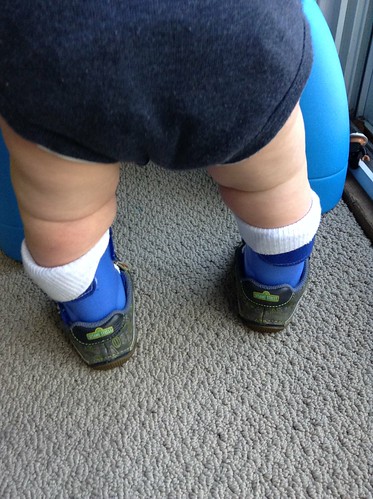