May 24, 2016
It's been a while since I updated--we've been here, busy as usual, and adjusting to the next phase of Matthew's treatment. I've been taking photos and making mental notes of things to share, and in my head it's now developed into a few posts worth of information! So I'll start with a quick post explaining the next phase, and then if I get another chunk of time I'll tell you a bit more about our experience. And maybe I'll even get another post about pie together.

AFOs come in various shapes and designs, but Matthew has rigid ones that come about 2/3 of the way up his calf: 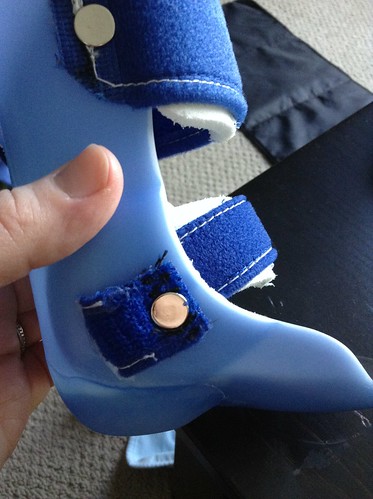 AFOs are more typically used to treat children with low muscle tone or difficulty stabilizing their ankles. Matthew does have some low tone in his lower legs and feet as a result of the long amount of time he has spent in casts, and he certainly benefits from this extra stability. But the major benefit his doctor sees to them is that the soles are rigid, meaning they will keep his feet firmly in a flexed position, maintaining the benefits gained from his last surgery.

They also mean he can hopefully get up and move around better than if he had a bar connecting his feet, although many children apparently do learn to walk in the boots-and-bar combo.He is already much stronger and more stable on his feet, although he has a long way to go to catch up.

The drawback to AFOs for clubfoot treatment is they don't do much to maintain the rotation of his feet--they offer a bit of support for that, but without the bar in between it's still possible for his feet to turn back in. We are doing some stretching to combat this, and his doctor has told us that she is much less concerned about that for him than she is about him losing the dorsiflexion he has gained recently.

So that's the basics (and apparently the end naptime--that worked out well!). Next time I'll tell you more about how they've been working!
clubfoot

Sheri Karobonik said…
My son has had AFO's for 25 years, so if you need parent to parent help just send a note.
10:32 am