A different kind of pony ride

September 22, 2016
I guess I haven't posted a health update on M in a while! He had his spinal MRI several weeks ago. It went well, other than it taking them half an hour to get his IV started. He was fortunately already sedated when they started trying, but the poor guy woke up covered in needle marks. I know it's hard to find a vein on a chubby baby/toddler, but that's one reason we go to a children's hospital!

Because of doctor's vacation schedules and holiday weekends, it took over a week to get the report, but in the end the news was pretty good--his spinal cord is normal, no tethering or other obvious problems. This still leaves a bit of mystery about his diminished nerve function, but right now his doctors are content to take a wait and see approach, and hope as he gets more use of his feet the nerve function will improve. Unfortunately the lack of nerve function makes it hard for him to use his feet, but he is trying hard.

Despite his challenges I've signed him up for several parent and tot activities this fall, and he is having a blast at all of them. Being around other kids really encourages him to try new skills and push himself physically--I know the other parents at gymnastics wonder why I have a crawling baby there, but when he grabbed my hands and tried to walk out after the other kids, it was clear it was the right decision. (Let me give a small shout out to the fabulous Coach Kate at Shining Star Athletics. E already adored her, and M is rapidly learning to love her too. And we are so grateful for her flexibility in allowing our non-walking toddler to attend the toddler class!)

After a late summer break from physiotherapy we returned this week, and the take away was similar to what I already felt: M is making fabulous progress considering the many ways his body is working against him, but it's disappointing that his feet aren't functioning well enough for him to really get up and about. He did surprise me by showing off all his skills, though, and was cruising much better than he ever does at home, so things are moving along.

And we came home with a new "toy" as well--a device called a Pony Walker, which is a "gait trainer." This walker supports him while he learns to take steps, allowing him to weight bear a bit to develop strength and hopefully develop the bone of his left hip. M isn't totally sure about this yet--he seemed to like it at the clinic, but hasn't been excited since we got home. But I suspect once he discovers that it gives him increased mobility it will be very exciting. We have it on a three month loan from KidsAbility (another fabulous local organization--M currently receives his physio services there, but they offer a huge range of services for children with varied special needs). Since it's a free loaner, it's seen a bit of abuse, but it's still a great way to access something we hope to only need for a short time: 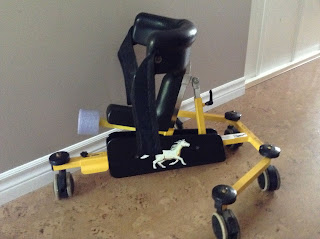 As for next steps, right now M's next appointment with orthopedics is in November, when he will get another x-ray of his hip and we will discuss further plans for his overall treatment. In the meantime we continue with physio and getting stronger every day.