May 17, 2017
M's physiotherapist has been giving us all kinds of tools to try to help him gain the strength he needs to eventually walk, and one very successful one has been the "twister straps" I referenced in my last update. Now that he's had them a bit longer I can tell you a bit more about how we are using them.

So our simple hack was to attach the rings directly to the shoes! We used a nail to poke holes directly in the shoes and then threaded the rings through them. (The shoes we've been using are old hand-me-downs anyway, so I had no qualms about poking holes in them. But having done it I would happily poke them again in newer shoes--it works great, and the holes are small.)

We also have some fabulous teeny tiny flexible rain boots that are amazing over AFOs (hoping to post a separate review, but I highly recommend them for kids of all sizes and abilities--take a look at http://mymayu.ca/). Those I didn't want to poke holes in, because that would defeat the purpose of rain boots, but they have toggles at the ankle and we've managed to attach the straps there for puddle walks. 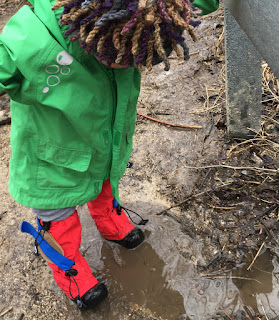 The straps have done a great job giving M more stability while he strengthens his legs, and the result was that 4 weeks ago his physiotherapist felt he was ready for a new tool--a walker. 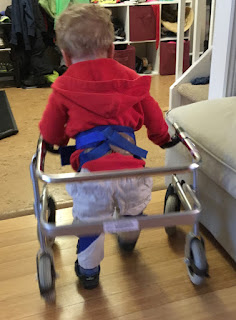 Little kid walkers come in several designs, and we decided pretty quickly that he needed the kind that pulled behind him rather than a more conventional "push walker." Because his upper body is so much stronger than his lower body, push toys (and thus the walker) tend to get pushed very far out in front of him and his feet can't keep up.

He actually still managed to have this problem with the pull walker, but it was a lot easier to get under control--we just needed to provide a bit of tension to slow the walker down while he caught his feet up. After a few trips down the sidewalk with a parent hunched over to hold it, we developed a back-saving hack: 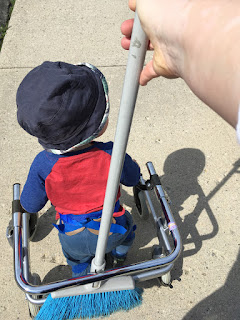 A broom! Slipped it in between the bars and we could provide variable resistance and a bit of steering as needed while he learned what to do. And within a few weeks he no longer needed it, because his feet are moving fast enough to keep up.

Beyond that, in the last few days we're seeing huge developments. Improved range of motion, strength, stability, etc. And the big one: he has started taking occasional independent steps! One or two at a time, usually when distracted or very motivated (bubbles did it at therapy this morning). But every step is forward progress and met by very loud cheers around here.