May 22, 2018
After a few years of watching US-based friends get boxes from services like Hello Fresh, Blue Apron, and Plated while I lamented the lack of Canadian meal subscriptions, our turn seems to have finally come. There seem to be three major players in Ontario now, and as all of them have recently had great deals to sign up I decided to try them out.

If you haven't heard of meal subscriptions, they are a service that delivers a box of recipes and ingredients to your house every week (or whatever weeks you choose!). They typically include everything you need to cook the meal other than oil, salt, pepper and some basic cooking tools.

We started with Hello Fresh, which is probably the most established of the three, given that they have been operating in the US and Europe for several years now. My friends in the US had largely summed it up as a decent basic option, but not as interesting or gourmet as the other companies there, so I wasn't sure what to expect.

The Choices
When I signed up I looked through all the offerings for the week and decided the meals available with the "family plan" were a bit too bland for us (if I'm paying a premium for someone to send my ingredients and recipes, I'd like it to be more interesting than our usual fare), so we chose their "pronto plan." Because at least one of my kids is usually a big eater at dinner and we like to have leftovers for lunchboxes, we opted for the 4-serving plan. (The family plan automatically includes 4 servings, the pronto plan offers a choice of 2 or 4.)

We had a menu of options to choose from for the week, and picked three that sounded tasty to us--turkey burgers with sriracha mayo and sweet potato fries, pork chops with couscous, and a beef stir fry with noodles. Hello Fresh plans automatically include 3 meals per week, whereas some of the other services allow you to choose the number. 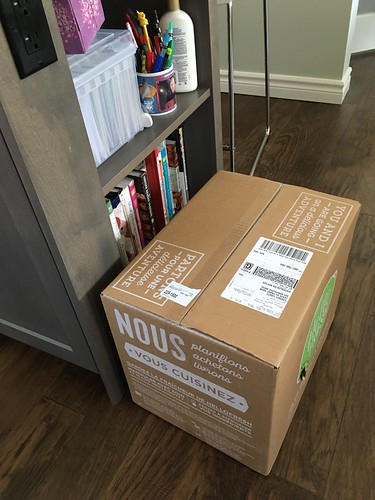 On our selected day, this very large box arrived. It felt a little bit like Christmas! We opened it up and found a bunch of papers (lots of explanations of the service plus the recipe cards--more about those later), and underneath that were three paper bags. Each of these was labelled as being the ingredients for a particular meal, so you can just stow them in the fridge and grab them the night you need them. (My only quibble with this system was that one bag contained tomatoes, which in general shouldn't be refrigerated--I realized this a few hours after tossing it in the fridge and pulled them out, but would have appreciated if they'd noted that on the packaging!) 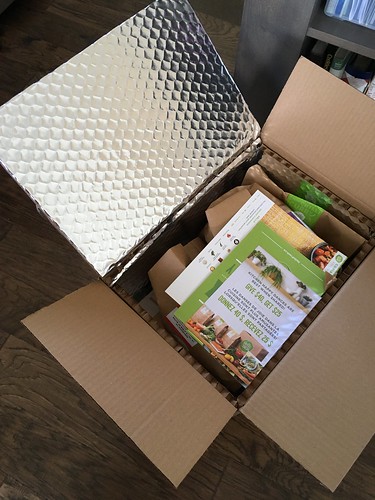 Underneath that was another layer of the insulating cardboard, then the vacuum packed meats and several ice packs. I got home not long after our box arrived, so it wasn't left sitting too long, but it is packed to ensure it can sit out for several hours if it comes while you are at work or away.

All the ingredients are packaged in small quantities--it's designed to be enough for you to use for the enclosed recipe without waste. Unfortunately, this creates a lot of wasteful packaging, and this was amplified by having chosen the 4 serving option. Instead of just packing up twice as much of each ingredient, they gave us 2 of each individually packed item. So two vacuum packs of meat, two small envelopes of spices, etc. And when it came to the sriracha mayo for our turkey burgers, we received 13 small packages of mayonnaise! 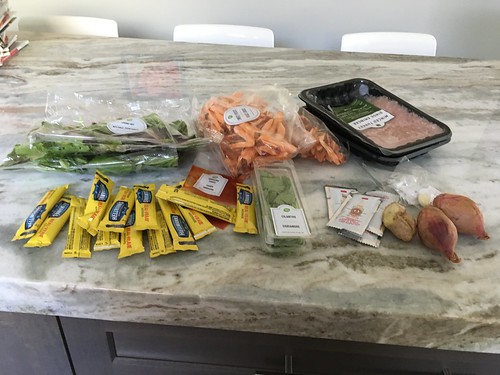 This felt really wasteful to me, and was probably the second biggest disappointment from this box.

The Recipes
The recipes came on large (8.5x11) cards with an enticing picture of the finished meal on one side and step by step instructions on the other side. 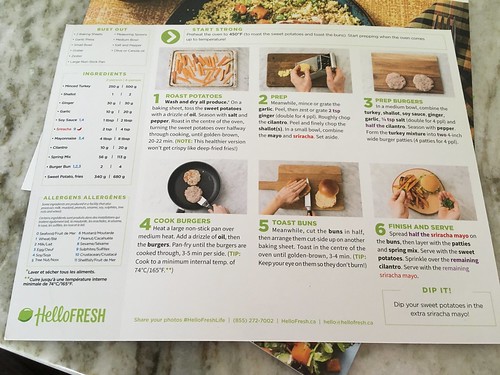 They were clear and easy to follow. I liked that they tell you up front all the equipment you will need (although a few things were not specified, I suspect because nearly every recipe uses them--cutting boards and knives, primarily). They also include tips to speed up the cooking process, and they keep you well organized. E, who is about to turn 7, loves to cook, and he was able to join me and do a lot of the cooking himself.

All three meals said they would take 30 minutes start to finish, and we found that pretty accurate. When they took longer it was because I was interrupted by other household tasks or family members. (Or, in the case of the above turkey burgers and sweet potato fries, because my oven took a long time to preheat.)

The Food
This was the most inconsistent part of the Hello Fresh experience for us. Overall the recipes were well thought out and included great flavours, and most of the ingredients were good quality. Unfortunately, a few were not.

The sweet potatoes for the fries were soggy in their packaging when we arrived (and we cooked that meal the day it came--recipes that use ground meat or contain seafood are helpfully labelled as "cook first"). The pork chops were really nice, thick cut chops--but they were actually two totally different cuts of pork, one significantly thicker than the other. Both good in their own right, but the thickest chop took 8 minutes longer to cook than the thinnest. 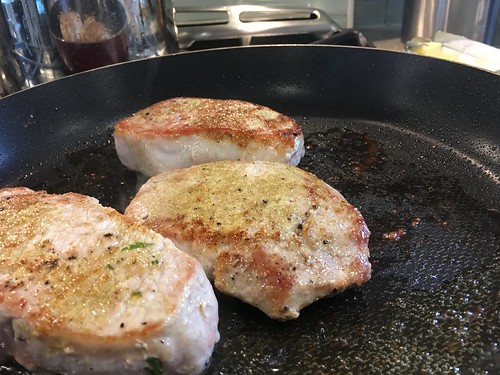 I also felt the ramen included with the stir fry should have spent a minute in boiling water before being tossed in, as the noodles clumped together and became gummy. While the adults in the house were disappointed with that dish, however, E loved it and devoured it in his lunchbox the next few days, so it wasn't a total miss.

Overall the food was pretty similar to dinners we have regularly, but the meals did make it to the table faster than usual. The portions were generous--we probably would have had enough to feed all of us with the 2 portion option, just without leftovers. I felt two of our three meals needed additional vegetables to be a complete dinner, though--the broccoli below was an addition I made, as well as a side salad. 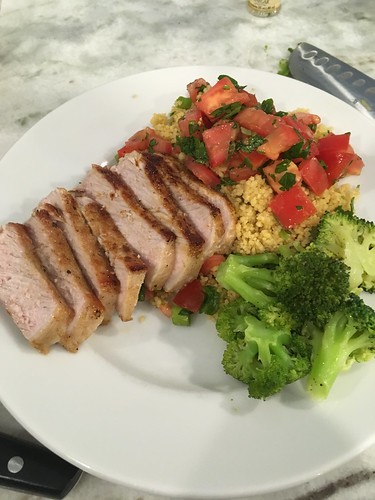 Overall Judgment
Because we had a significant discount on our first box, I felt we had decent value for money even with the many small complaints I had. However, the regular cost for what we got in our box is $140. That's roughly equal to a full week of groceries, from which we'll get breakfast, lunch, and dinner for 7 days (well, maybe 6 dinners and one night of take out) vs. the 3 dinners plus a few lunches here. For that much of a premium I really want to be wowed by the food.

I don't plan to order again unless something changes--the price, my budget, the offerings, etc. But I can see the value in the time savings this box offers for someone in a different position than I am. In particular it could be useful if you aren't in a position to keep a well stocked pantry and are also pressed for time but still want to enjoy a tasty, family friendly dinner. It could be a good intro to home cooking or a good bridge for a hectic time in your life, like my friend A who has been using it while her family prepares for a transatlantic move.